In the summer of 2004, I had the opportunity to study with documentary photographer Billy Howard at the Rocky Mountain School of Photography. One of our projects was to visit an assisted living facility in Missoula to interview and photograph some of the residents. I got to spend the afternoon with Doug Mackey, and I remember our conversations fondly. Here is his story: 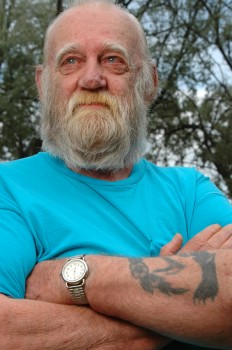 I grew up in St. Ignatius as Doug Sulier, my stepfather’s surname, with 4 sisters and 3 brothers. I am the 3rd oldest. I met my “blood father,” who had gone to Alaska to mine for gold, when I was 23. Since my mother’s husband didn’t legally adopt me, when I joined the army at age 17, I had to change my surname to Mackey, like it read on my birth certificate. I’d get yelled at in training, “Son, don’t you know your own name?” to which I’d honestly respond, “No sir, I don’t.”

I spent 3 years in the army, as a machine-gunner, in Panama and Costa Rica “jungle-training” for the Korean War. I never did serve in Korea, and felt guilty — so many friends didn’t come back. The guys in my unit became very close, as we were kept together for 3 years. The guys from the city were so interested to hear of Montana; they thought there were still Indian Wars going on here.

I got this horse tattoo in Panama. Got very friendly with a bottle of gin that night, and it seemed like a good idea. Tattoos are not allowed in the military, because of the risk of infection, but we wore long-sleeve shirts, and the officers would just shake their heads, but not reprimand us.

The military tried for 2 years to get me to reenlist, but I would have nothing of it. “What do I think of this war?” “Same as what I asked years ago about Korea: What in the name of Satan are we doin’ over there?” “The people there don’t want us there.” “I hate to listen to the news.”

My best friend I met in the recruiting office, Bobby Strauss. His dad was a professional gambler. I hope to see him soon. Haven’t seen him 7 or 8 years.

I have 6 kids, several grandkids and great-grandkids; all are gathering in September in Missoula for the first time in a bunch of years. I’ll will be 72 on September 1st.

My grandfather, a little husky man, my mother’s father, “was dying to come West”; so when a job came up for the government, he transferred. He worked on the reservation, “doing a little bit of everything; I don’t know what his job description was.” He was killed accidentally while working on a power pole; everybody liked him and his was one of the largest funerals seen here: the procession was 2 miles long. Grandma never quite got used to living up there and didn’t want him buried on the reservation, even though that’s where he wanted to be buried. She had him buried in Missoula.

When I go, I want to be cremated. And spread my ashes … down Broadway … hell, I don’t care.

I grew up on a farm on “the Mission.” We all worked hard. We killed and cured our own deer and elk. Had a root cellar and canned the extra food we grew in the summer to last through the winter. I walked to school; as a kid, I didn’t know any other way. Our dogs would follow us to school and then go home. Sunday afternoon was our free time. I’d often go fishing. Never had a pole, just cut a willow. Never had trouble catching them. Get enough for the whole family to eat.

The last time I went hunting was with my brother Don on Blue Mountain. I saw a buck and 2 does step out into a meadow. I just lay down my 30.06 in the grass beside me. That afternoon, Don asked, “Did you see anything?” I said, “No.” Years later I told him.

When I was 15, we moved from the ranch to Missoula. My stepdad had a construction business, and business was better in Missoula. He was so particular about doing things right, he never advertised — people ran around after him to get him to do a job for them. He was born in Canada; his brother, Clyde, was a shoemaker.

My grandfather’s brother was Bob Watt, a state senator in Montana. He had a good reputation with the working people; he traveled all over this state. He wrote a book on the family.

My mom was a unique lady. She wrote a couple of books, mystery stories. She had it hard, all us kids and all the work she had to do. She was considerate, easy-going until she made up her mind. Honesty was the main thing. Treat other people the way you want to be treated. As hard up as we were, I never felt that as a kid. And as kids, we were not discriminating.

My dad (stepdad) would buy the toughest, meanest horse at the auction for cheap, and have it tamed in a month. “I never saw my dad hit a horse or other animal, but he sure whipped the dickens out of me.”

I earned a horse the summer I was 13 or 14, working for a neighbor, who then gave me the horse: an American Saddler mare, Queen. He also gave me a saddle, but dad took one look at that and put it away. I learned to ride bareback. I’d often ride up to Mission Dam to swim. Funny, dad couldn’t get along with Queen; he’d spend 2 hours chasing her trying to catch her, but I got along with her great — I could walk up to the fence and call her to come. I could lead her around by the mane — no halter. She was a “grey”; I don’t know why she was called grey, she was white with 2 small grey spots on her rump. Lots of older guys were jealous because she was so fancy, and I was just a kid.

I traveled — I couldn’t wait to get to the city — but always came back to Missoula. I went into the army at 17, and then wandered around after that. I worked here, there; I could walk into a town where so many others were out of work, and get a job in a day or two, even without experience. I like to talk with people and often would get hired on the spot, without background checks. I worked as an auto mechanic, and in the Butte mines, 3200 feet underground loading ore cars; I thought it was interesting.

I’ve worked lots of different kinds of jobs, but the best one was for the state as an alcohol/drug counselor. I was an alcoholic myself, but sobered up. I did that job for 5 years, and really enjoyed that. I think I was good at it; I knew when they were trying to con me, because I’d been through it myself.

I settled down when I got married. Lived for a while in San Diego, worked on a fishing boat; net fishing, we’d be gone for weeks at a time.

I like meeting new people — good guys, bad guys. I like meeting the tourists — they’re here because they’re interested in this country and asking you about your life.

I’ve had quite an interesting life. I wouldn’t trade it for anything. I didn’t misbehave, but I sure wandered. “Anything I wish I had done? … I wish I had continued to wander.”

“Anything I wish I had not done?… I wish I had settled down earlier. I always thought I should have. My family would always ask me, when are you going to settle down?”

Getting a photo is worse than going to the dentist. If I’d a-known there would be pictures, I would have trimmed my beard — when I was a kid, it was unusual to see a clean-shaven man — I would have put on my tux. You know, T-shirts are one of the best things ever thought of.