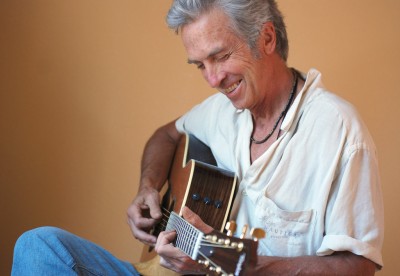 The evening after Michael Kevin Daly moved to Sisters, he walked over to the opening of Nancy Becker and Mark Gillem’s Reride art show. The bleary-eyed newcomer hadn’t even summitted the three steps to the porch, when he was greeted with “Hey Michael! How are you?” from one side, and handed a guitar on the other.

His exhaustion lifted, “I felt so thoroughly welcome,” he recalls, “Now I’ll take folks seriously when they say, ‘Bring your guitar.'” Or, he could bring his “bizarre” — a cross between a bouzouki and a guitar, that he designed and had a luthier build.

Daly’s life lays out like an occupational and geographical Spirograph, and the circles of his experience currently depict a freelance filmmaker intent on collaboration, even though he’s worked in all the roles.

Daly’s first artistic love is music — his first band was The Riverwind Trio, a Kingston Trio imitation group, while a teen in Queens, New York. Fresh out of high school, he headed to southern California to surf and attend college on the side, studying theater. His first experience with photography was in front of the cameras. He landed small parts in films, television and commercials, but it was mainly a means to make a living so he could play music. He’s played genres from rock ‘n’ roll to celtic, and was signed to a record deal for his songwriting in the 70s.

In preparation for a month-long vacation to Hawaii, he bought a camera. He stepped through the viewfinder of that Pentax and emerged a photographer.

And then the circles started to overlap: He started with photographing musicians for record covers, celebrities and athletes for magazine articles. Not one to sit still for long, in addition to surfing, Daly has become proficient in cross-country and alpine skiing, running, kayaking, fencing, horseback riding, golf, swimming — rising to the level of competition in several sports.

He took on landscapes and fashion photography as well, landed in Bend in the late 70s, and teamed up with Bob Woodward on a few sports articles, just as telemark skiing was becoming mainstream.

Then the sports photography took off and he was in prime position to ride the wave — he had “ins” for models and locations; “I knew which of my buddies I could count on to gracefully ski off a cliff with a smile, and not land on me.”

For the last three decades, Daly has lived in Eugene, Sun Valley, Tahoe, New York state, San Francisco, and back to Eugene — all the while traveling the world writing articles and shooting rights-managed stock and assignments for a formidable list of who’s-who of corporations and magazines (see www.michaelkevindaly.com for this and his portfolio). Along the way, he expanded his skills into cinematography.

And what drew Daly back to central Oregon, to Sisters? “Sisters Folk Festival. I’ve attended the festival several times; that and the Songwriting Academy just grabbed me. Of course, I’d driven through many times, taken by the location, the proximity to both the mountains and the desert. Sisters reminds me of a Western version of an Irish village. I’m more and more impressed with the people I meet. People want to be here in Sisters. This town has soul. The schools’ art and music programs are personal, so creative. Everything flowed so easily for this change; it feels like it’s meant to be. I feel very fortunate to be living here.”

Daly plans to stay closer to home, and the relaxed atmosphere of Oregon, in the near future. But he’s “not into just cruising. I like to keep learning. There are so many multi-talented people in this area; I’m very much looking forward to collaborating on film projects with other artists in central Oregon.”

Even combining all the elements of filmaking: cinematography, still photography, music and songwriting, scriptwriting, acting, and state-of-the-art equipment, (including a high-definition movie camera and a “steady-cam” harness that allows for smooth hand-held camera maneuvers), Daly says he “can’t do just one thing.” His third solo music CD is on the docket for next spring. He’s also eager to volunteer with the school music programs. “Oh, and I want to get back into horseback riding again.” He laughs, adding, “Maybe I need another lifetime lopped on top of this one?”