Sometimes people ask me, “So what does a designer do? How would I know if I need a graphic designer?” Good question.

Here, I’m going to show you, visually, a few examples of my projects and tell you the stories behind the design process of these. 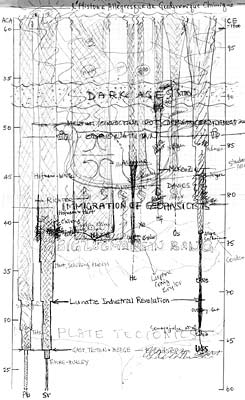 Making a Story Visual:
First, the creation of an image depicting the history of geochemistry with special references to one of the founding fathers of this field, Claude Allègre, also presented onscreen as a slide, from sketch through concept to final poster & slide presentation:

To the right is a copy of what the Woods Hole Oceanographic Institution scientist, Nobu Shimizu, presented to me: his sketch of a history of the development of Isotope Geochemistry.

The major publications are listed by author, visually expanding the knowledge of particular isotopes. Major events relevant to geochemistry are also presented, with special reference to Claude Allègre, former Minister of Science of France, who was instrumental in the development of this field of science.

The slide of this illustration was presented by Nobu Shimizu, also an accomplished geochemist, at the Allègre Symposium (in Allègre’s honor for his 60th birthday in 1997), as the keynote address for the conference. It was so popular, that we got several dozen requests for reprints of the image as a small poster.

Here is where I got to have fun: translating the sketch into visuals, in other words, graphic design: I chose to illustrate this history in the context of an “olde mappe.”

This “olde mappe” depicts key events and publications in the development of Geochemistry with particular reference to the prominent contributions of Claude Allègre of France.

The timeline starts at the bottom, with minimal knowledge about Lead (Pb) and Strontium (Sr), and when in 1962, Allegre was 25 years old. The banners represent publications of significant additions to the knowledge base of particular elements.

In the 1960s, geologists finally embraced what had been formerly received as ludicrous, that the continents move atop the molten mantle, an idea called plate tectonics. 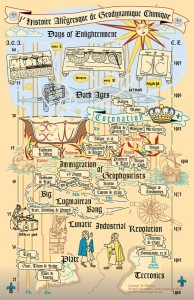 “Lunatic Industrial Revolution”~ Members of the “Lunatic Asylum” (CalTech), led by Wasserburg, invent and assemble a new-generation thermal ionization mass spectrometer, the Lunatic I, generating a quantum leap in analytical precision. Many laborers in isotope labs across the world were turned out into the streets, as their institutions of employment could not compete with the new technology Revolution.

“Big Lugmairean Bang”~ Gunther Lugmair’s use of the Sm-Nd system for dating lunar rocks launched the use of the Nd isotopic composition as a natural tracer. Compositions of radiogenic isotopes came to be understood as time-integrated parent/daughter changes via solid-melt processes, which attracted rapt attention from the “Convectionists,” and subsequent Immigration of Geophysicists resulted in the formation of the Melting Pot.

“Coronation”~ In the year 1986, Claude Jean Allègre and Gerald J. Wasserburg have the prestigious Crafoord Prize bestowed upon them at the Royal Swedish Academy of Sciences by nothing less than the very hands of His Majesty the King of Sweden himself-himself, as it was proclaimed, “Their immense creative contributions of pioneering work in isotope geology will have a lasting impact on the geological sciences.”

“Dark Ages”~ Allègre takes leave of the nurturing community of his fellows for employment by the government (he was the Minister of Science of France for a while).

“Days of Enlightenment”~ Finally, Allègre returns to the research realm, and his colleagues celebrate his continuing contributions.

So, there’s one example of one aspect of graphic design: making a story visual. You may ask, well, how did you get all that information from the sketch? I didn’t. I asked questions of Nobu; I found out as much as I could about the details of the story. As I heard the details, I made notes and the visuals just came to me.